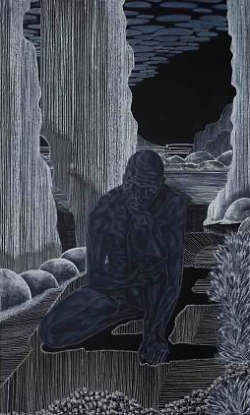 Drawing, for Toyin Ojih Odutola, is a form of storytelling. These new works, exhibited around the 90-metre sweep of the Barbican Curve, form part of an epic series relaying an imagined ancient myth. The artist uses pencil, pastel, ballpoint pen and charcoal to create the mega-sized portraits that are as delicate as they are beautiful.

Walking into this show about the culture and history of the arctic is a bit of a shock, because you’re immediately slapped around the face with a map from a totally different perspective. The north. The very, very north. It’s the world from the top down, and you suddenly and immediately realise that you’ve been looking at the map in the same, European, way forever, and it has totally ignored other cultures.

Under a filthy plastic tarp, Kai Althoff tells his impenetrable stories. The German painter has lowered the Whitechapel’s ceiling and littered it with leaves and debris. You walk under this dirty, constricting canopy to pore over his mystical, romantic, violent works. 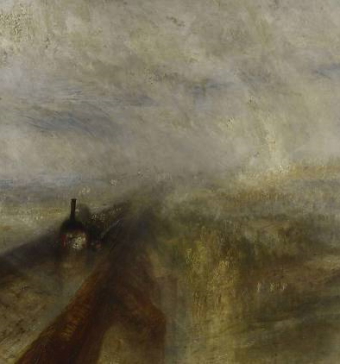 J.M.W. Turner is now one of the most famous and well-established painters to have ever come out of Britain. Which can make it hard to appreciate just what a radical Turner was during his lifetime. His loose, loose and looser-still approach to landscape painting repeatedly shocked the painterly establishment, but it wasn’t just his artistic style that was innovative. Turner was fascinated by the new inventions of the Industrial Revolution, as captured in the 100% glorious ‘Rail, Steam and Speed’. And – guess what? – you can see it irl in this show!! Which basically justifies the price of an entry ticket on its own accord. Only this being Turner, you’re also guaranteed a whole heap of other genius works too. (Can we stress enough how much we love a bit of Turner painting a train?)

Trate Studios is one of the only business to exclusively provide a complete full range of fine art services required by artists and galleries to integrate & communicate with the modern fine art world.

We use cookies to ensure that we give you the best experience on our website. Read more.